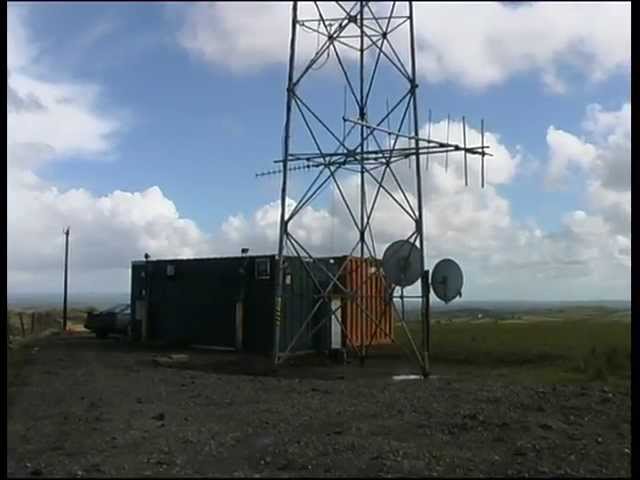 Energy 106 the megawatts FM dance station that blasted Belfast from Co Monaghan on the Irish border for 9 years.Early Energy in the 90s, with the basic TX container, only yards from where Kiss FM’s 103.7 24 Yagii stack was in 1988, and a mile away the dimensional interface zone, called St Patrick’s Chair and Well., the Irish Border is yards away.
Extended clip with shots of the late T Carter Johnston, (90 and my father) in the Energy Transmitter running full power at 5.6KW, this gave us about 800KW ERP from this antennae stack. Seen here are the two back up tranmsitters. Magic 105.1 ran on an amateur radio rig vastly upgraded, but never the less quite inefficient, on 800W, it could run 1.6KW if really pushed. Other rigs are solid state 200W “TEM” rig, and some back up exciters and drivers, with 3 autostart delay timers, so the generator would not blow when all came on at the same time.
The Scalar Weather warfare at the end was a common feature at the Lurgan Golf Club, also noted for the appearance of alien massive jellyfish beings which used to hang around the 9th hole.

The 2 dishes allowed Magic 105 and then Power 107 to be accessed remotely, often from England.
It is very probable that the station was being used for MK-Ultra type mind Control, as this was suspected,(Which is why Lawrence was abducted??) suitable counter measures were employed. This is why the tower itself was vandalized some 5 years after we stopped “transmitting”, just to make sure, by MI6.