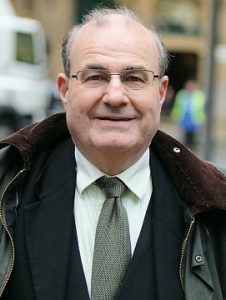 Michael Shrimpton is an intelligence and national security lawyer and consultant. He was formerly an Adjunct Professor of Intelligence Studies in the Department of National Security, Intelligence and Space Studies at the American Military University, teaching intelligence subjects at Masters level to inter alia serving intelligence officers. He has wide ranging connections both in Western Intelligence agencies and amongst ex-Soviet Bloc agencies. The late Generaloberst Markus Wolf, of the Stasi and DVD, was one of his contacts. Michael has earned respect in the intelligence community for his analysis of previously unacknowledged post-WWII covert operations against the West by the German DVD organization based in Dachau, near Munich, Germany, and its British, French and American client agencies. In 2014 he was maliciously prosecuted for an alleged bomb hoax after receiving a tip-off about a missing Russian nuclear warhead, which was duly recovered.

Talk description: Michael will talk about the Prussian and German intelligence interference in Ireland since the 19th century and the assassination by Germany’s GO2 of poor Martin McGuinness.