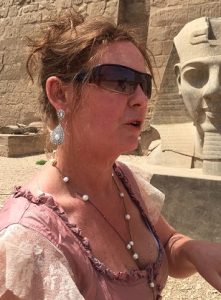 Born in Ireland, Antoinette Lyons Glynn is the founder of the Flower of Light Mystery School in Luxor Est. 2006, the only Irish-Egyptian Mystery School in Egypt.  At age 14, Antoinette had a near death experience in which she would receive her life mission.  That mission was to re-establish the connection between the ancient lands of Atlantis Eire Ireland & Egypt, to reawaken and make available their Sacred Science.  Based on information she received, Antoinette has developed Bio-Quantum Geometric Healing, the Science of Ascension.  She runs Sacred Journey’s, Workshops, Courses and Private Consultations in Egypt and Ireland.  Antoinette’s goal is to share the deepest mysteries of life, death & the nature of reality and to awaken the memory and knowledge of her ancient ancestors.

Talk: From the Emerald Isle to the Blue Nile – The Atlantis Ireland / Egypt Connection

Talk description: The knowledge and wisdom of ancient Egypt was a legacy handed down from an even older civilization.  A highly advanced civilization that had at the core of its science and philosophy, the immortality of the Soul, its interconnectedness to the Cosmos and the One Creative Energy.  They were known as the Masters of the Net, they were the Wisdom Keepers of Atlantis Éire Ireland.  They were the Masters of the Mystery Schools.   The Temples and Pyramids of ancient Egypt are depositories of their Sacred Science and Wisdom, they are portals for consciousness to project itself into the cosmos to the heart of the Creator.  In this talk Antoinette will discuss the arrival of the Irish into ancient Egypt, their Science and advanced technology and their eventual exodus out of Egypt and back to the land of their ancestors, Atlantis Éire, the Emerald Isle.